We are delighted to announce the list of accepted panel and paper submissions for the 2013 Social Media & Society Conference. We have a great line-up of presentations by researchers and practitioners from 60+ institutions hailing from 15 different countries! General registration is now open and the conference program is available.

Abstract: New products, ideas, norms and behaviors are often thought to propagate through a person-to-person diffusion process analogous to the spread of an infectious disease. Until recently, however, it has been prohibitively difficult to directly observe this process, and thus to rigorously quantify or characterize the structure of information cascades. In one of the largest studies to date, we describe the diffusion structure of billions of events across several domains. We find that the vast majority of cascades are small, and are described by a handful of simple tree structures that terminate within one degree of an initial adopting “seed.” While large cascades are extremely rare, the scale of our data allows us to investigate even the one-in-a-million events. To study these rare, large cascades, we develop a formal measure of what we label “structural virality” that interpolates between two extremes: content that gains its popularity through a single, large broadcast, and that which grows via a multi-generational cascade where any one individual is directly responsible for only a fraction of the total adoption. We find that the very largest observed events nearly always exhibit high structural virality, providing some of the first direct evidence that many of the most popular products and ideas grow through person-to-person diffusion. However, medium-sized events — having thousands of adopters — exhibit surprising structural diversity, and are seen to grow both through broadcast and viral means. Finally, we show that our empirical results are largely consistent with an SIR model of contagion on a scale-free network, reminiscent of previous work on the long-term persistence of computer viruses. 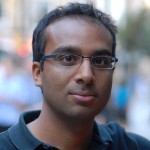 Bio: Sharad Goel is a Senior Researcher at Microsoft Research – New York City, where he works in the general area of computational social science, an emerging discipline at the intersection of computer science, statistics, and the social sciences. He is particularly interested in large-scale empirical analyzes that address questions motivated by sociology and economics. Sharad holds a PhD in Applied Mathematics and a Masters in Computer Science from Cornell, and a BS in Mathematics from the University of Chicago. Following postdoctoral positions in the math departments at Stanford and the University of Southern California, he worked in the Microeconomics and Social Systems group at Yahoo! Research.

“Tweeting to learn: An exploration of Twitter-based learning during conferences”, Sarah Gilbert and Drew Paulin (University of British Columbia, Canada).

“Monetizing the mommy: Community and the commodification of motherhood in blogs”, Andrea Hunter (Concordia University, Canada).

“Are we there yet? A comparison of micro-blogging activities in public organizations from a community engagement perspective”, Mary Cavanagh (University of Ottawa, Canada) and Luanne Freund (University of British Columbia, Canada).

“An ethnographic study of the re-conceptualization of opinion leadership via Twitter amongst Egyptian revolutionaries in the post-Jan25 revolution era” Hend Abd Almotagally (Cairo University, Egypt).

The research poster session provides an interactive forum for authors to discuss their research.

Note: The poster session will be scheduled on Saturday (September 14, 2013) afternoon.

Note to Presenters: Posters should be no larger than 4 ft wide by 3 ft high. Poster boards and push pins will be supplied.

“Is it getting better? A case study of social media for social change”, Funda Kivran-Swaine (Rutgers University, United States) and Nicole A. Cooke (University of Illinois, United States).

“Playing local: An exploratory study of the marketing practices of independent Edmonton musicians in the digital age”, Kirsten Bauer (University of Alberta, Canada).

“To tweet or not to tweet: The legal implications of social media in a global world”, Lisa Macklem (University of Western Ontario, Canada).

All #SMSociety conference presenters will receive an exclusive invitation to submit their work as an expanded full paper in a special journal issue of Social Media + Society (Published by SAGE, 5-yr Impact Factor: 5.073).